Lately, one of my friends asked me about some early iconographic pictures of the pavise. So I've found something for him but, at the same time, I conceived the idea of writing an article about it here.
I was looking at many photos taken on those "around-Grunwald" events and I found out how easy it is to get a 'nystagmus' caused by all those motley pavises held by guys of the infantry and small pavises in the knight's hands. There were a lot of motifs, starting with St. Mary's images, through arms, to dragons and unicorns and all that strange stuff.
The earliest, almost-west European sources that are showing anything about pavises, are seals of Mazovia princes. There are two known images of simple, small pavises for a horsemen. Their surfaces are mellow, with a slight decorative motif around. 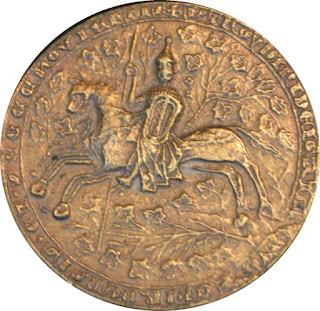 Troiden from Czersk, 1326 (a copy of not preserved seal, made in XIX century) 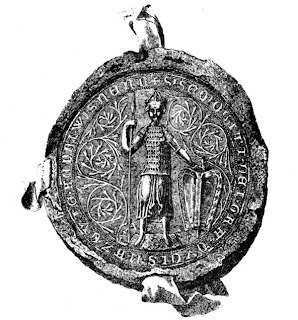 Ziemowit II of Rawa , about 1345 (a copy of not preserved seal, made in XIX century).
In following times, pavise started to be used in the way we know best - as a big shield for infantry. But it is still hard to find this typical coffin-shaped form with a ridge in the iconography of the 2 half of 14th century... wait, actually, I didn't find anything. However, what I've found, are few oval or rectangular (with rounded corners) shields meant for the infantry. If we take them as pavises - even overdoing a little bit - we have to notice very simple paintings on them.

Altar of Clarisses from Wrocław, around 1350

A copy of the Saxonic Mirror taken from Legnica, 1397 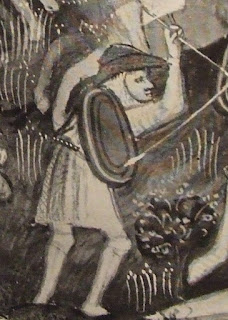 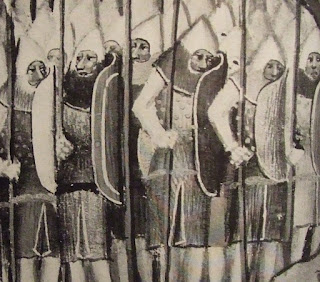 fragments of the Bible of Vaclav IV, Czech, last quarter of 14th century

Pavises with ridges are back again in the 1 half of 15th cent. But they are still painted in quite unsophisticated way. 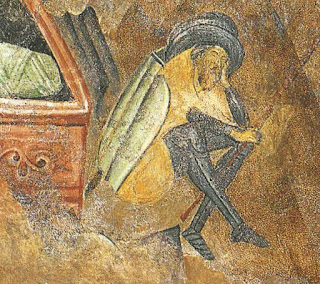 Paintings in a Ruthenian style from the Trinity Chapel from Lublin, finished in 1418 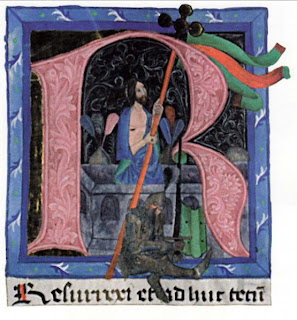 Missal from St. Elisabeth's Church in Wrocław, made till the end of 1420 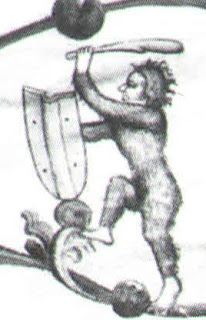 Missal from the Cathedral of Cracow, created by Master of the Lady with Unicorn, around 1450 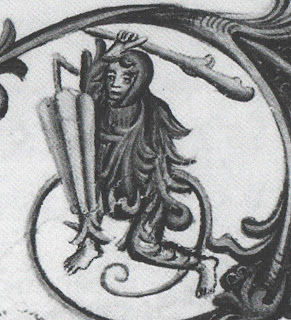 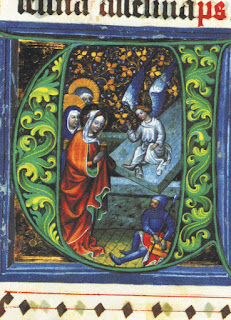 Antiphonal of Zbigniew of Oleśnica, after 1423

The earliest pictures of pavises with more 'ambitious' painitngs on them were made after the battle of Grunwald.
For example, on the wall paintings from Trinity Chapel in Lublin, mentioned above, I found many different pavises, and, among them, one with a simple ornament made in its edge. 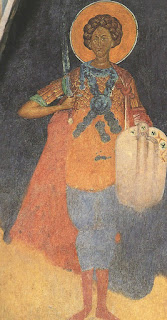 Another one, known from a wall painting in Strzelniki created between 1418 and 1428, has an inscription on its surface.

But still first picture of fully painted and ornamented pavise I know comes from the scene of the Resurrection from the altar in Rajhrad (thirties of 15th cent.). 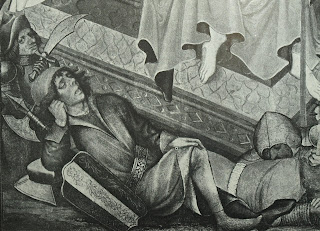 The most coloured, ornamented pavises with figures, inscriptions, plants and so, come from after the half of the 15th cent.
And in case somebody would try to accuse me of passing over some sources: Mateusz Goliński said about a description of the Arsenal in Wrocław (from 18th cent.) and a few pavises that supposed to be there - with images of St. Mary or John the Baptist's head, and even one with number MCCCXC... It isn't known if that last one contained any figural scene painted on it. What's more, there is no information about what number precisely it is.
Time for some recap: a pavises with an images of saints, inscriptions, plants like those taken from Amazonian jungle - it is not the beginning of 15th century, it is not Grunwald...
It is assumed that pavises like this, with figures and written prayers are typical for hussites. I think it is quite probable; that was the period when whims like this appeared in arts for the first time.